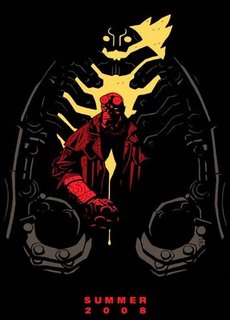 The two new releases this week are Guillermo del Toro’s Hellboy II: The Golden Army and Journey to the Center of the Earth, which is being billed as the first-ever live-action feature created for 3D viewing. Oh, and Meet Dave, which looks to meet an even worse fate than The Love Guru.

I’m in the camp that says Hellboy 2 will edge out Hancock to take the week. Guillermo del Toro’s name has broken into the public’s vernacular in the past couple of years with Pan’s Labyrinth and his being tasked to direct The Hobbit movies. The first Hellboy has developed a cult following since it came out in 2004, and I think these factors will drive its sequel to No. 1

I think also think Journey to the Center of the Earth will do surprisingly well. Reviews have been fairly decent, but whether or not it will grab enough patrons to bump Wall-E from the top 3 is debatable. I think, though, maybe movie-going patrons are in the mood for a movie that is purely popcorn, and it’s hard to find something more popcorn than what Journey offers.

Official Predictions:
1. Hellboy 2
2. Hancock
3. Journey to the Center of the Earth