Sunset Boulevard is the story struggling screenwriter who is hired to edit a screenplay by a silent film star trying to make her grand return to film after years of obscurity.

Penned by D.M. Marshman Jr., Charles Brackett (who produced), and Billy Wilder (who directed), Sunset Boulevard is a deservedly classic film noir that paints a brutally honest picture of the film industry’s transition from silent to talkies.

Some of silent film’s most popular stars make cameos in the movie, including Buster Keaton, Anna Q. Nillson, and H.B. Warner. Gloria Swanson herself, who plays the deluded Norma Desmond, hadn’t had a feature film release in nine years when Sunset Boulevard 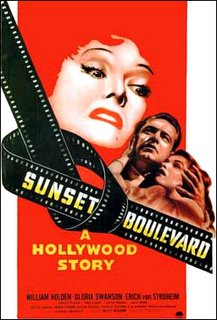 was released. Erich von Stroheim, who plays the butler, Max, who had discovered Norma, directed many of her films and had been her first husband, had directed Swanson in real life in one of her last silent film flops, Queen Kelly (which happens to be the film screened in Norma’s private movie theatre in the film).

I particularly enjoyed the parallels between Norma’s derailment and the story of Salomé, which was the film she was hoping to make with Cecil B. deMille, who also cameos in the movie as himself. While Norma is in many ways the antagonist of the film, she’s also its most tragic character. Put on a pedestal as a young woman and then having that pedestal yanked from beneath her once silent film gave way to talkies, it’s hard not to feel for this forgotten star.

At the same time, you can’t help but feel she’s being a bit melodramatic about the whole thing. As Joe tells Norma toward the end, “There’s nothing tragic about being fifty. Not unless you’re trying to be twenty-five.” But with the knowledge that her butler Max has been feeding her delusions, convincing her that the audience still thirsts for her by writing fake fan mail, hiding the industry’s lack of interest from her, you come to the conclusion that Norma stood little chance in a place as brutal and crazy as Hollywood.

And yet, Sunset Boulevard, while indicting some of the tactics, also shines light on the heart of Hollywood in the form of young Betty Schaefer, played by Nancy Olson, as an aspiring screenwriter who reminds Joe what it’s like to work on something that’s about more than just a paycheck.

There are a number of good bits of dialog in this movie, but I’m going to have to go with perhaps the most famous as my favorite.

Favorite Line: “You see, this is my life! It always will be! Nothing else! Just us, the cameras, and those wonderful people out there in the dark! All right, Mr. DeMille, I’m ready for my close-up.”