If you were following me on twitter the weekend of September 18-19, you might have seen my flurry of tweets regarding the culmination of post-production on LOVE IN AN ELEVATOR. 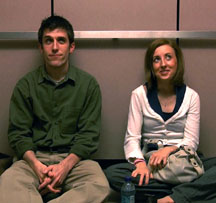 I could have futzed around with it for many more hours, which could have spanned into days and weeks and probably months, but I realized I had very little to gain by doing so, and that the need to move on to other projects far outweighed my desire to fix certain issues.  After all, this was my first short film, created with the sole intent of gleaning an idea of how one goes about creating such things.  I wasn’t going for an Oscar or even for any festival submissions, so it was time to move on.  In allowing myself to do so, I knew I’d be chalking up some things to lessons learned.  Here are three items that jump to mind.

As I’ve touched upon before, I ran into a little snafu when, during a sort-of-pivotal shot, it turned out myself and a couple of other members of the crew were visible in the reflection of the glass doors behind my male lead.  After spending an embarrassing number of hours trying to figure out how to blur us, I finally decided it was time to let go of that dream and pretend it was purposeful.  And so, I present to you here my newly developed film-school analysis.

In this particular shot, the male lead is watching the female lead walk away from him, struggling with whether or not to call out to her, and ultimately deciding not to, all while be watched by a film crew, which symbolizes how we all have the choice to be observers or doers.  We can sit back and be an audience to life as it passes us by, or we can take action and change our destinies.  We can become the people others watch.

That works, right? Symbolism is way easier than After Effects.

Lesson Learned: Don’t shoot against reflective surfaces from an angle and/or time of day where you’ll be visible because then you will dump hours of your life trying to learn After Effects on your own and still fail and have to draw upon your creative writing skills instead to explain away the fact that you and your crew remain visible in a shot where you should not exist.

2) You can see temperature as much as you can feel it.

I was amazed in post-production to see how moving the camera up or down a matter of three or four feet or in and out of an open elevator completely changed the color of the shot.  I managed to fix it a little in post, but it again ended up being one of those things that I decided wasn’t worth futzing with more than I already had.  I’ve got no film school analysis on that one, but it’s definitely something I’d like to avoid as much as possible in the future.

Lesson Learned: Find a set that uses the same style of lighting in all locations, bring your own lighting, or don’t move your camera ever.  Alternatively, read your camera’s manual, as there are probably settings to help lessen that effect.  Also, consider finding a cinematographer if you are not one (I am so not).

3) There is more than one kind of Creative Commons License.

Imagine you’ve found music under a Creative Commons License that you really like.  You download it and spend a good eight hours arranging it for your short film, matching it up just so it enhances what’s happening on the screen.  You’re really happy with it.  And then, you go back to double-check the info for the credits, and you see you’ve used a piece with a non-derivative license.  You furiously google this term that has stricken fear into the very center of your heart.  You feel your soul deflating as you find that you have violated the terms of this particular sort of Creative Commons license by creating a new work, both by arranging it and setting it with video.  You pin your hopes on an e-mail sent to the owner of the piece, asking for permission.  You never hear back.  You cry and gnash your teeth and scream to the heavens, “WHY? WHY?!”  But it does no good.  You delete the music track, the mouse-click like the sound of a shotgun firing at your heart.  And you go back to the drawing board.

I actually scored my film a total of three times.  The second bit of music I found never matched up quite as well as I’d hoped it would, and so I went back to the drawing board a third time.  Both the second and third attempts, I made absolutely certain I was using music completely and truly in the public domain, via a glorious website called MusOpen.  If you’re in need of classical music recordings in the public domain, they’re an excellent place to get it.

Lesson Learned: Do your research and read carefully.

I know there are more lessons to be discovered yet, but my focus right now is on getting everything ready for my viewing party on Saturday.  I alternate between being excited, a ball of nerves, and just ready to have it all over and done with.  It’s probably a healthy mix, but it leaves little mental energy for deep reflection.  Next week I’ll be posting it online for those who want to see it, which will have me in another cocktail of excitement, nerves and fatigue, I’m sure.  But I can only focus on one near-meltdown at a time, so that one will have to wait until Sunday.